Hair will no longer fall out in Chemotherapy | Beyaz Gazete TV 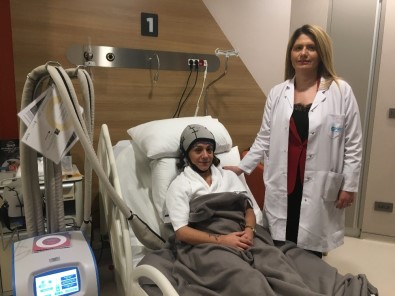 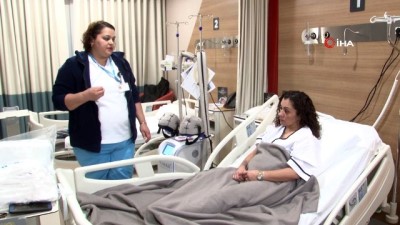 Stating that hair loss due to chemotherapy affects the patients and their environment, İzmir Kent Hospital Medical Oncology Specialist Assoc. Dr. Tülay Akman said, “This device is important for all individuals, men and women. Especially for women, hair becomes more important aesthetic concerns. In addition, since the cancer disease shows to the environment a little in terms of psychosociality, when hair is lost, patients may be a little more upset because of the reactions from the environment, even if they accept it themselves. Patients with children are more anxious because they will realize that their child will see him that way and become sick. It saddens them that every time they look in the mirror, they don’t have a part of him either. With this device, we prevent hair loss caused by chemotherapy. Cooling treatments similar to this device are applied in different centers in Turkey, but this device is applied with the latest technology. A success rate of 90 percent is reported. “Higher success rates are reported because this device makes more efficient cooling,” he said.

Noting that the scalp is prevented by the ice helmet worn on the head, Assoc. Dr. Akman said, “A hat is put on the head with a gel. With this hat, a certain amount of heat is given and the head is kept at a constant temperature. Cooling is started 1-1.5 hours before chemotherapy. Afterwards, after the chemotherapy is over, the hair structure of the patient is kept on his head at varying rates depending on the chemotherapy he received, and a treatment takes 3-4 hours. When you look at it as the mechanism of action, the scalp is a structure consisting of living cells that reproduce rapidly. Chemotherapy also affects fast-growing cells and hair is one of them. With the device, it prevents vascularization by creating contraction in the capillaries leading to the hair in the head, and it shows its effect by preventing the drug from reaching the ends of the scalp. In this way, the patients’ hair does not fall out because chemotherapy does not affect the hair follicles ”.

Stating that the patients did not report any complaints other than feeling cold and headache, Medical Oncology Specialist Assoc. Dr. Tülay Akman stated that the device has no other side effects.

Stating that the cost is reasonable compared to applications such as wigs used for hair loss in chemotherapy, Assoc. Dr. Akman said, “We charge per session here. If the patient is not satisfied in the future, we give them the right to quit. Compared to other wig care packages, I think it is not that expensive. 400 TL is given per session until the chemotherapy is over. If the patient has a situation of withdrawal, the patient has the right to quit. “We get the fee per session, not as a package,” he said.

“My children were very affected when my hair fell out”

Gülçin Ayhan, who has been receiving cancer treatment for 4 years, said that the device will be a great morale for the patients and said, “If I had knowledge about this device before, I would like to use it. My children were very impressed by the loss of my hair. If you think about it from my point of view, health comes first, but I would like to use this device 100% so that my children and those around me are not affected. My hair is important to me as a woman ”. Source: UAV

* All the news published by Anadolu Agency, İHA are included in this section as they are automatically received from the agency channels, without any editorial intervention by beyazgazete.com editors. The legal interlocutor of all the news in this field is the IHA Agency, which was the subject of the news.

Hair will no longer fall out in chemotherapy | Kayseri Erciyes University